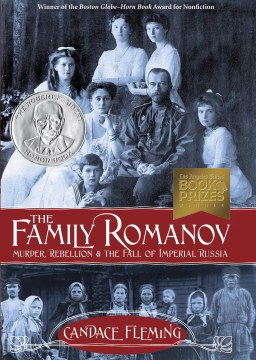 Murder, Rebellion, and the Fall of Imperial Russia

From the acclaimed author of Amelia Lost and The Lincolns comes more nonfiction at its very best'and a perfect resource for meeting Common Core standards. Here is the riveting story of the Russian Revolution as it unfolded. When Russia's last tsar, Nicholas II, inherited the throne in 1894, he was unprepared to do so. With their four daughters (including Anastasia) and only son, a hemophiliac, Nicholas and his reclusive wife, Alexandra, buried their heads in the sand, living a life of opulence as World War I raged outside their door and political unrest grew. Deftly maneuvering between the lives of the Romanovs and the plight of Russia's peasants'and their eventual uprising'Fleming offers up a fascinating portrait, complete with inserts featuring period photographs and compelling primary-source material that brings it all to life. History doesn't get more interesting than the story of the Romanovs.
Publisher: New York : Schwartz & Wade Books, 2014
ISBN: 9780375898648
0375898646

This book is a great read on the fall of the Romanov ruling family in Russia. The book is a great introduction for readers who may not be as familiar with the Romanovs and Russian History, and Candace Fleming writes in a very exciting and suspenseful manner. The author also documents the plight and poverty of Russian citizens, violence against Jewish people towards the end of the Romanov’s rule, and the military defeats of the Russian Army during World War I. As someone who does not know as much about Russian History, I appreciated that the author did not solely focus on the Romanovs.

A nice, easy to digest non-fiction book that follows the story of the Romanovs. Events are detailed that ultimately led to Nicholas abdicating and the family being imprisoned until their deaths in an easy-to-follow manner.

Excellent read! Even though I knew what was going to happen, I kept rooting for the ending to be positive.

Verrrrry good book. I have wondered about the circumstances of the Romanov deaths and later sightings. Without having to read 800 pages with 200 Russian names to keep track of this book answered all my questions. I feel like I got a good picture of the family, the excesses of the ruling class, the ridiculous way WW1 got started, and who the "Reds", the "Whites" and the "Bolsheviks" are. Very good historical information that felt like a novel.

This book is a good overview of the fall of Imperial Russia. It is a quick read and a great jumping off point for anyone interested in the Romanovs.

This is a very good book.

This book got me obsessed with the imperial family. I got so obsessed I used Tsar for many of my usernames.(Like this account)

Maybe I'm a sucker for history-not maybe, I totally am-even so, this book was top notch. Fleming perfectly captured the imperial family in their truest forms. It wasn't overwhelmed with blood and gore, although there is some of that. She wanted to paint them with a more normal brush. Not just royals but a family. She did not forget the people! She gives a great account of Russian history. Just enough to hook you and encourage you to learn more. You can't beat that.

An amazing and well written book, very similar to Steve Sheinkin's writings, and extremely informative. would recommend to anyone who love history. Kept me reading to the last page.

A great book! I couldn't stop reading it!

The beginning of the end of Romanov rule of Russia began with the ascension of Nicholas II. Ill prepared for the crown by his father, Nicholas depended heavily on his new wife Alexandra (married under the shadow of the death of Nicholas’ father their marriage was seen as a curse by the Russian people). Problems for the Romanovs multiplied when Alexandra, after several difficult pregnancies, produced only female heirs leaving the line of succession unsure. A disconnect from the government and the people, and an overdependence on Alexandra and her religious advisors, made Nicholas appear weak and indecisive. When their son Alexi was born, the couple thought all their trails were over…unwilling to acknowledge the revolution brewing in their country.
Living an idyllic, close-knit family life, the Romanov children were unaware of the turbulence outside their palace. As Russia entered World War II the patience of the people frayed. They formed their own representative government, a rebellion that Nicholas did not handle well taking all power away from the Duma before their first meeting. The people, incensed at the Tsar’s disregard for their rights to be heard rebelled again and were only sated when Nicholas abdicated the throne. Living in exile and house arrest, the Romanovs thought they would be able to live the quiet life they had always wanted. But as the White Army marched to Siberia to free the family, their Bolshevik guards rounded the family up in the basement and murdered them, disposing of the bodies in a marsh. The legend of the Romanovs would live on after their 300 year reign.

"The tsar offends the nation by what he allows to go on in the palace . . . while the country offends the tsar by its terrible suspicions. The result is the destruction of those centuries-old ties which have sustained Russia. And the cause of all this? The weakness of one man and one woman. . . . Oh, how terrible an autocracy without an autocrat!"